Caterpillars in my Garden

I have a few pots with tomatoes, peppers and some herbs. It has not been a good year for the tomatoes, as the birds got most of them and then they got stripped by bugs. The peppers did better, but The Husband eats most of those. The herbs have done okay until today when I found one pot of parsley GONE and this in its' place: 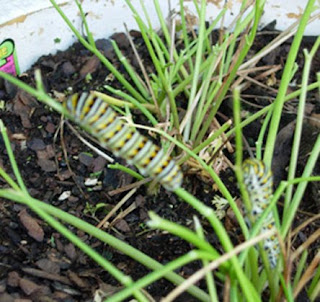 There are six of them. They are the caterpillar of the Eastern Black Swallowtail Butterfly. I learned a lot about them today, especially that they eat fennel, parsley (flat or curly, they're not that picky) carrot greens and rue (whatever that is).

I have another large pot of parsley that I am going to sacrifice to them and have moved everyone to the far end of the yard near a small crape myrtle where they can build their cocoons or chrysalis'. Two of them are quite large and maybe ready to pupate. I am going to try and keep them supplied with fresh food and hopefully they will turn in to these: 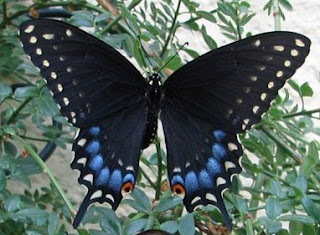 The Female version or 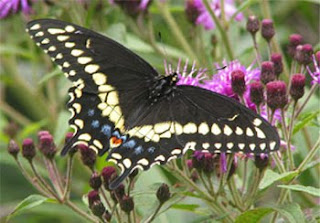 I'm hoping for some ladies as I think they are prettier with the blue, but I'll be thrilled with any and all.
Posted by Chris at 4:55 PM