The computer was down yesterday for installation of a new fan so today I'm catching up. 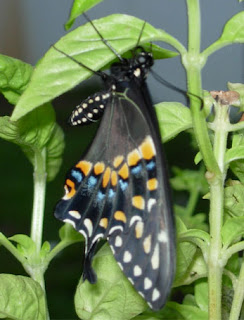 This was the little caterpillar that started to pupate on the basil just as Claudette rolled into town last week. I could not find him the next day and thought he was a goner but Tuesday I was sitting out and looked over at the basil and there he was in all his glory right next to the empty cocoon. I'm pretty sure he's a he because there is more yellow than blue on the top of the wings. He is the only one that made it from the original six caterpillars.

I watched Claude take his first flight from the basil plant to the middle of the grassy yard where he sat for about a half hour, then he took off over the house. I hope he makes it to where ever he's heading!

The Husband was inspired watching Top Chef Master and decided to make something from Rick Bayless' book "Mexico One Plate at a Time". The Husband LOVES tamales! Me, eh, I could take em' or leave em'.

Well that was before I had these! They were fantastic.

Spreading the massa. I took over for The Husband after I snapped this pic, so I could say I helped.

The pork filling. This was made the day before so all the flavors would meld together.

Tamales all wrapped and ready for steaming. We both could not believe how delicious these were. The Husband made some red beans from the same book and served the tamales with a chile sauce that had just the right amount of heat and flavor. We froze enough for another 2 meals! Economical and yummy!

I have some sewing updates, but I will save those for tomorrow!
Posted by Chris at 2:48 PM