Many sewers do monthly updates, so I thought I would start doing them too. I actually got 2 garments done in May, the first being Simplicity 4176 which I posted pictures of earlier and I also finished Simplicity 3724, an OOP It's So Easy pattern. 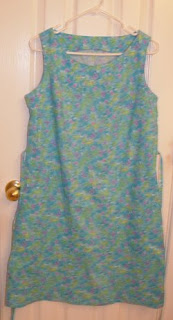 Sorry the picture is blurry, I don't know what happened there. I had to take a picture of it on the hanger because The Husband is out of town. Anyway this is a really simple and easy dress. If it wasn't for the back ties this would be a shapeless sack. The ties only make it marginally better. But when the humidity is pushing 90, this is one cool little number. Nothing binding or clingy. I made it from quilting cotton from my stash.

I might actually make this dress again if I come across a nice cotton print. It is just so easy to wear on those HOT, HOT days, of which many are on the way.

So 2 wearable garments in one month, not great but not bad either. I know they were both super simple but hey I don't need anything fancy right now.

I am working on a muslin for a simple straight skirt that I'm hoping will work out to be a TNT pattern from Butterick 3717. 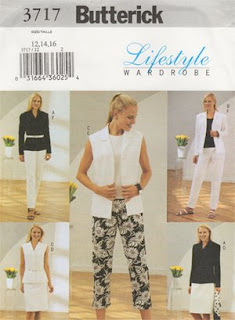 Earlier in the year I made the capri pants from this pattern and they turned out rather nice, so I'm hoping the skirt works out too. Maybe I'll even make the jacket someday.

Lily has a few tricks up her paws, this is her favorite. If you say 'belly rubs' she will flop down where she is and roll over on her back......sometimes you don't even have to say the magic word. She LOVES belly rubs.

Ed has a few tricks too, but I have yet to capture them on camera. He feels a Rottweiler has to keep his dignity in front of the camera, lest some silly act come back to haunt him. But I'll catch him someday, he really is quite the clown at times.
Posted by Chris at 3:32 PM