Chicagoans love their pizza and this is so true in our house.

I had never had a pan pizza until The Husband took me to his favorite place Lou Malnati's. This is the ONLY pan pizza I will eat, all the others are too doughy for me. After all I am a Southside Girl, where thin is in.

Lou's pizza is very, very good.  We use to eat at the original Lou's in our town of Lincolnwood about once a month. We use to get par-baked pizzas to take on the road with us when we RV'd. It is a very, very good pizza.

The recipe for this pizza is closely guarded. The pizza has been featured on several of the Food Network shows and Mark Malnati is adamant about not giving out the recipe.

Now, The Husband has pretty much got his thin, crispy pizza down pat, but re-creating Lou's Pizza has been a lot of trial and mostly error!  The dough is the issue. Lou's is not at doughy as most other pan-pizzas and the sides are somewhat crisp.There have been several internet recipes that he has tried that tout they are just like Lou's but none have been ever quite right. 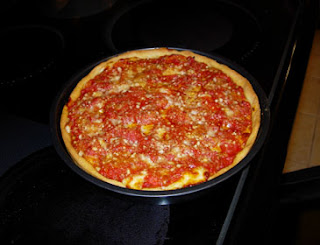 This pizza was the closest The Husband has come to re-creating Lou's. It wasn't too doughy and the side crust was nice a crisp. He just needs to tweak the sauce and add more pepperoni (Lou's does not skimp on the meat) and it will be there! 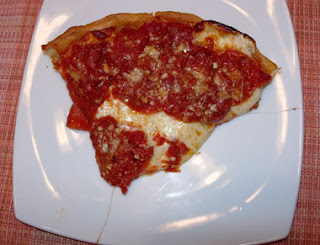