The Husband and Julia

A week before Christmas The Husband and I watched the movie 'Julie & Julia'. It was great, Meryl Streep was wonderful.  Anyway I realized that though The Husband has a large collection of cookbooks he didn't have 'Mastering the Art of French Cooking'. So being the good wife that I am, and thinking of all the delicious things he could make me with this book I got it for him in time for Christmas (along with 2 other cookbooks!). 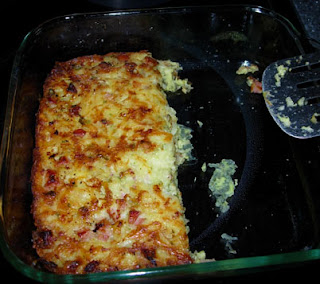 This smelled soooo good when it came out of the oven we dug in before I could snap a picture. It was heavenly, light but rich with flavor. We had it for breakfast on New Year's Day and had enough left for a light lunch the next day.

This was his second recipe from the book (no he is not going to cook every recipe in the book, at least not in year......I still don't know how she did 564 recipes in 365 days!).  The first recipe was Soupe A L'Oignon (Onion Soup).  Frankly we were disappointed in this, maybe we were just expecting too much. It took several hours to make (simmering the onions and all) and wasn't really worth it.  We'll stick with The Husband's recipe.  Oh, well they can't all be winners!
Posted by Chris at 5:05 PM