I Have Met Thy Enemy, The Jersey Knit

I have always been a woven kinda gal, but I have seen some gorgeous tops and dresses made from knits, and I wanted in on this action. I read over a lot of reviews on PatternReviews.com and other blogs before making the plunge. I saw people who 'said' they never sewed with knits before do bang up jobs, even without a serger, so I figured I could do this.

Armed with a lovely ITY black and red jersey from DenverFabrics.com, New Look 6753, a brand new pack of ballpoint needles and my trusty Pfaff 7570 I headed into battle!

And a battle it was, right from the beginning. How and the heck do you cut and sew this stuff neatly? It is slippery than a Chicago politician ( I know, I'm a Chicago native)! And marking, let's not go there. Wax-free tracing paper, tailor's chalk, chalk pencils, soapstone marker....nothing stuck to this fabric. I was tempted to try a Sharpie, but just gave up.

Let's move on to sewing the evil knit. I tested my Pfaff's stretch stitch and a regular straight stitch on swatches of the jersey and chose the stretch. It still puckered a little so I kept playing with the tension and got it the best I could. Keeping my seams straight was nearly impossible, I felt like a drunk, always verging off the road. I could not get the neckband and seam allowance to lie flat, so decided to topstitch on the outside as they suggested. BIG MISTAKE! I tested the straight stitch on my swatches with the appropriate layers of fabric and it looked okay. But, of course, when I did it for real on the garment I couldn't keep the vehicle on the road! This fabric just had a mind of it's own. My top stitch looks like quilt stippling. So, I've read where several people have made mistakes on knits and ripped out the stitches and fixed it.

Fat chance, those stitches were buried in like ticks on my dog's a**! They weren't going anywhere.

Let's talk armholes. Stitch, stretching band to fit. Okay, did that, but it stayed stretched. If I had Hulk arms it would be great, but I don't. Not very becoming.

At this point I was going to toss it, but I really like the print. It would go so well with my new capris I just made. So I turned the hem up and zigzag stitched it down.......making a nice little ruffled edge.....instead of a nice flat hem as intended. So here it is:

If I apply the quilting theorem "if it looks good from a galloping horse", then it's not bad. But I don't think I can apply that here. I am totally disappointed. I'm not sure why I had so much trouble. Maybe the jersey isn't the best knit to start with, maybe a serger would have helped but really I don't think so. I have a cotton knit, ottoman knit and 2 more jersey fabrics in my arsenal. I may have lost this battle, but I will win the war on knits.

The Husband made himself a wonderful meal for his 60th birthday (you really didn't think I was going to cook, did you!!??). 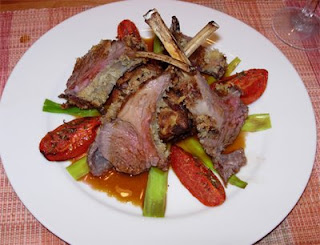 Herb-crusted rack of lamb, sauteed leeks, rosemary roasted tomatoes with a rosemary portwine reduction and (underneath in the center where you can't see very well) a mushroom and bacon bread pudding that was out of this world! He really outdid himself, this meal was fantastic!!