The Chronicles of Louis the VII Rottweiler 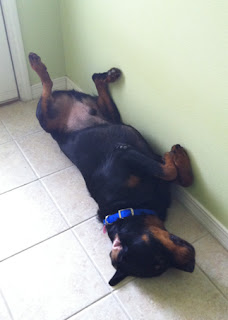 As you can see Louie is making himself right at home!  We have had a good and bad week.  First the good, he is not as possessive with his toys and is learning to give them to us.  We have not revisited the rawhide bone issue yet......baby steps.  He is really focused on his toys and would play until he dropped if we let him.  With the kind of heat we've had recently we limit playing outside to early morning and late evening.

We did get him a new toy to channel some of this energy. 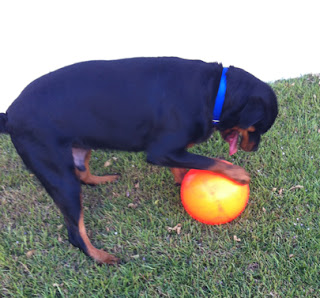 A Boomer ball!  Tyson, the first male we had before Edgrrr, loved his Boomer ball and could actually pick it up in his mouth (he was a BIG boy).  I don't think Louie's gonna make that happen. 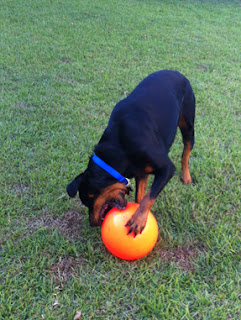 But not for lack of trying.  He loves it to say the least and lets us participate in a little yard soccer.
Louie is walking nicely on leash and is getting use to the Gentle Leader.  This morning we took him down to the Harbor and walked the length of the docks. 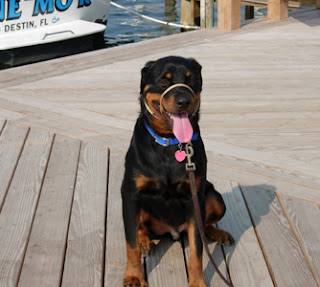 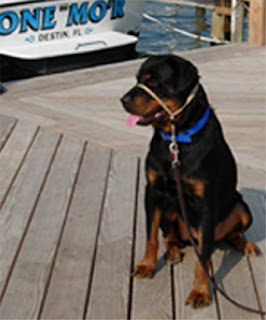 He was the perfect gentlemen, meeting all kinds of people and a few of the dock dogs.  He also probably had his first encounter with stairs, but after a puzzled moment took to them readily.

He had to revisit the Vet this week, and while it was better than the first visit, he still needs improvement.  They had to shave a little section where his tail meets his back and didn't take to that too well.  Although he did cuddle with the tech afterwards and didn't hold it against her.  He has some nasty old flea bites that got infected so we have a spray and antibiotics.  With Lily and Ed I use to just open their mouths and shove them down........luckily Louie LOVES his dinner, so I just open the capsules and mix them in.  He lets The Husband spray his flea bites and kind of lets him put drops in his ears.  He gets better every time.

Now for the bad. 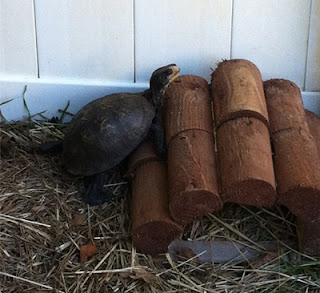 This is Angus T. McTurtle (aka Gus). He wandered into our yard in early May and liked it, so we built him a little pen in the yard.  He is very tame and not afraid of us so we think he either escaped another yard or some numnut let him loose.  When he hears the sound of my voice he will usually come out from under the bush in his pen.  He is an older male Gulf Coast box turtle, he likes eggs, sardines, strawberries and LOVES blueberries and blackberries.

Lily never really paid Gus no mind.  She investigated his enclosure right after we built it but that was about it.  When we brought Louie home he kinda did the same thing, showed a little interest but not a lot.

I get up really early, like 4 or 5.  I like to sit outside have my coffee and look for satellites and meteors (call me crazy).  Louie likes to get up early and, well....pee.  Tuesday we go out he does his stuff but doesn't want to come back in, so I leave him out while I make coffee.  When I go back out I can't find him (it is dark outside) finally I see him .....IN GUS'S PEN!!!! He's rooting under the bush, pulls Gus out and tosses him in the corner.  I run, yelling for him to stop (waking up the neighbors....it is about 5am) and haul him out of the pen.  Louie slinks to the house and I put him inside.

Gus is in the corner and has gone 'turtle' tighter than my favorite jeans.  He looks none the worse for wear and finally pokes his head out, gives me an indignant look and marches off back under the bush.  The next time Louie goes out he takes a wide route around Gus's pen.

Yesterday I get home from work and ask The Husband how everything went.......all was fine until he took his eyes of Louie (damn those iPhones).  He looks up to Louie rooting around under the bush and toss Gus like a frisbee OUT of his pen.  After a lot of' "Louie NO' and "Bad Dog", he gets Louie in the house.  Gus has once again gone 'turtle'.  He was unharmed but I think, is understandably pissed.

We don't think Louie means to hurt him but just play with him.  But a 2 or 3 pound turtle is no match for a Rottie.  So Gus is getting a renovation on his digs to keep the unscheduled play dates at bay.

And Louie's list of things to learn gets longer.